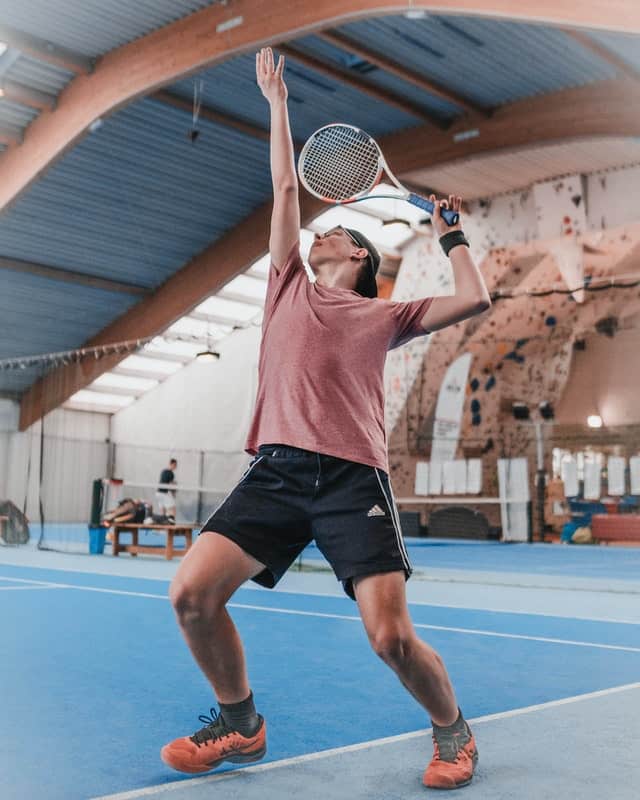 If you are wondering what is a let in tennis? We want to tell you that Let is related to the interference in a tennis match.

“The let” in tennis means playing again for the point. There are different types of Let available in tennis. In a professional tennis match, we sometimes see the umpire stop the game by saying, – let.  Usually, the referee calls the “let” to interrupt the game because tennis serves rules.

That’s not all. I want to explain details about the “let” rule of tennis in-depth here. Let’s check out.

First of all, Let is an unusual word in English with almost opposite meanings, utterly unrelated.

Another source claims that the Let word came from the French word “filet,” which means “net“. When it came to England, it became “Let” in sports.

When it comes to tennis, we use ordinary meaning to give a chance as there is no factual backing of this word’s origin.

What is a let in tennis?

In tennis, Let refers to a rule when a player has to replay for the point under different circumstances. Umpire or player calls let under two different situations. Those situations are –

The most common call of Let when serving is this. Under four circumstances, A umpire or player can call a Let. Those are –

Under different circumstances, let can happen when playing tennis. Interruption can come during a Rally too. During the Rally, a let is called when –

If this Let situations arise during a match, the player has to repeat the serving & the point will be restarted. No one gains any points.

How many let serves are allowed in tennis

In tennis, there is no specific rule or limitation on the number of “let” serves that can be made during a match. A “let” serve is typically called when the server feels that the conditions were not ideal when they hit the ball, such as if the ball hits the net but still goes over or if the receiver was not ready for the serve.

The purpose of a “let” serve is to stop play and allow the server to re-hit the ball without the point being counted against them.

‘No Let’ Rule in tennis

A serve Let counts as fair play under the ‘No Let’ rule. The opponent player must play the ball even though it touches the net. This rule comes in to speed up the gameplay. Both players & the umpire have to agree first in this term.

In the Next-Gen ATP Finals (2018), professionals implemented this ‘No Let’ rule on a trial basis. It didn’t go well because of uncertainty in serving. As a result, ATP stopped using this rule in 2019.

Nowadays, you can see this rule in recreational matches, but this rule doesn’t apply anymore in professional tournaments.

What Does “Let” Mean in Tennis?

If you say “let,” you’re saying that the previous serve or rally will be ignored and the point will begin again from the beginning. Whenever a second serve misses the net and is called a “let,” the point is re-started with a new serve. The point is restarted with a first serve in all other cases when a let is given.

There are some other terms related to Let in tennis. If you are not aware of these situations, you may find something new here.

Why Do They Call It “Let In Tennis”?

The term “let” in tennis refers to a situation in which a serve is replayed because it touched the net before landing in the correct service box. This can happen if the ball just barely clips the net, or if it bounces off the net and lands in the service box. When this occurs, the point is not counted and the serve is replayed, or “let.”

Some people think that the term “let” comes from the phrase “let it play,” meaning that the point should be allowed to continue. However, this theory is not widely accepted.

What happens if a let is called?

If a “let” is called in a tennis match, the point is replayed without it being counted against either player. This typically occurs when a player feels that the conditions were not ideal when they hit the ball, such as if the ball hits the net and still goes over or if the receiver was not ready for the serve.

The “let” call allows the players to stop play and replay the point without it being counted against either player. The rules of tennis state that a “let” call should only be made if the interruption or interference was significant enough to affect the outcome of the point. If the “let” call is disputed, the decision can be referred to the chair umpire for a final ruling.

A “let ball” in tennis refers to a serve that is not valid and needs to be replayed. This can happen for a number of reasons, such as if the ball hits the net on a serve and still lands in the correct service box, or if a player is not ready for the serve and makes no effort to return it. When this occurs, the referee will call “let” and the point will be replayed.

Difference between fault and let in tennis?

Fault: A fault occurs when a player serves the ball and it does not land within the proper boundaries of the service box or if it hits the net and does not go over. This results in the player losing their serve and the other player receiving a point.

Let: A let is called when a player serves the ball and it hits the net but goes over and lands within the proper boundaries of the service box. In this case, the serve is replayed and the point continues.

Who can call a let?

Any active player and the umpire call a ‘Let’ in singles or doubles.

Can you challenge a let?

When should a let be called?

The word ‘let’ should be said loudly enough for the opposition players to hear it as soon as possible when a let happens.

In a nutshell, Let is a form of disturbance in tennis matches. Now, what is a let in tennis? I hope you got the answer already. Let’s just pause & replay.

We described Let in tennis, its origin, types of Let call, and associated rules alongside ‘Let’ here. Learning those rules will help you clear your confusion & enjoy a tennis match to its fullest. Have a good day!

Hello, I am Robert A. Foreman. I have had experience in Tennis for a long time since 2016. I know the exact problems that a beginner faces and know the solutions also. I have shared all my knowledge about Tennis and Badminton on my website. Feel free to read them and know more important things and facts about Tennis and Badminton. follow me Twitter

Hello, I am Robert A. Foreman. I have had experience in Tennis for a long time since 2016. I know the exact problems that a beginner faces and know the solutions also. I have shared all my knowledge about Tennis and Badminton on my website. Feel free to read them and know more important things and facts about Tennis and Badminton. follow me Twitter

Indorgame is a blog about tennis, tennis racket, and tennis accessories which are given information based on tennis rackets, grips, strings, balls, machines, and badminton also.